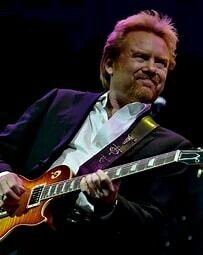 Show will be on a first come first serve basis, so get your tickets today.

Lee Roy Parnell is an American country music and blues artist, singer, songwriter, and guitarist. He has recorded nine studio albums, and has charted more than twenty singles on the Billboard Hot Country Singles & Tracks charts. His highest-charting hits are "What Kind of Fool Do You Think I Am", "Tender Moment", and "A Little Bit of You". Four more of his singles have charted in the Top Ten as well.

Tony Arata is may be best known for “The Dance”, a number-one U.S. country hit for Garth Brooks in 1990 which was nominated at the 33rd Grammy Awards for Best Country Song. He also wrote # 1 U.S. country hit “Dreaming with My Eyes Open” recorded by Clay Walker. Arata was inducted into the Nashville Songwriters Hall of Fame in 2012. Other artists who have recorded his songs include Suzy Bogguss, Lee Roy Parnell, Patty Loveless, Trisha Yearwood and Emmylou Harris